Living With a Star Program 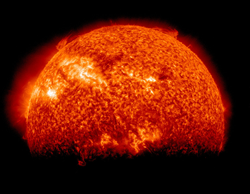 Heliophysics is the study of the Sun and its interactions with Earth and the solar system. The Heliophysics science program consists of two strategic programs/mission lines: the Solar Terrestrial Probes and Living with a Star; one Principal Investigator- led competed line (the Explorers); and a set of Research programs including a fleet of operating missions known as the Heliophysics System Observatory. All play a part in the development of scientific understanding of the heliophysics system.

Living With a Star emphasizes the science necessary to understand those aspects of the Sun and space environment that most directly affect life and society. LWS missions target the linkages across the interconnected system with an ultimate goal of enabling a predictive understanding. The first LWS mission is the Solar Dynamics Observatory (SDO), which was launched early in 2010. This mission observes how the Sun’s magnetic field is generated and structured and stored magnetic energy is converted and released into the heliosphere in the form of solar wind, energetic particles, and variations in the solar irradiance. The second LWS mission will be the Radiation Belt Storm Probes (RBSP). The twin RBSP spacecraft will determine how charged particles in space near the Earth are accelerated to hazardous energies that affect satellites, astronaut safety, and high-altitude aircraft. Concurrently with RBSP, the Balloon Array for Radiation-belt Relativistic Electron Losses (BARREL) will measure the high-energy particle precipitation from the radiation belts into our Earth’s atmosphere. RBSP will launch in 2012.

Following RBSP are the Solar Probe Plus mission and Solar Orbiter Collaboration. Solar Probe is mankind’s first mission to a star and will travel into one of the last unexplored regions of our solar system, the Sun’s corona. Solar Orbiter is a Sun-observing satellite under study as a collaborative mission with the European Space Agency. Solar Orbiter will be the first satellite to provide close-up views of the Sun’s polar regions, which are very difficult to see from Earth.

An LWS Science component provides two services to the missions planned. First, the program supports Targeted Research and Technology (TR&T) investigations in a few key areas, especially those crossing boundaries between scientific disciplines and research techniques. Second, LWS supports the comprehensive models required for development of a forecast capability. These Strategic Capability models are made available (e.g. via the Community Coordinated Modeling Center) for use by the scientific community and for evaluation for potential transition to operational use.

The Space Environment Testbeds (SET) Project is an element of the LWS Program that characterizes the space environment and its impact on hardware performance in space. The goal is to improve engineering approaches to mitigating solar weather effects on spacecraft design and operations. The SET-1 instrumentation is set for a 2012 launch on a technology spacecraft sponsored by the U.S. Air Force.

What is “Space Weather”?

Everyone is familiar with changes in the weather on Earth. But “weather” also occurs in space. Just as it drives weather on Earth, the Sun is responsible for disturbances in our space environment.

Besides emitting a continuous stream of plasma called the solar wind, the Sun periodically releases billions of tons of matter in what are called coronal mass ejections. These immense clouds of material, when directed towards Earth, can cause large magnetic storms in the magnetosphere and the upper atmosphere.

The term space weather generally refers to conditions on the Sun and in the solar wind, magnetosphere, ionosphere, and thermosphere that can influence the performance and reliability of space-borne and ground-based technological systems and can endanger human life or health.

Magnetic storms produce many noticeable effects on and near Earth: